Market Alerts
Human Resources: Start your career with Hill Petroleum! If you're looking to work for a great company in which you c
Employment Opportunities: NOW HIRING - in Arvada,   CDL Class A Driver Monday - Friday, CDL Class A Driver Tuesday - Satur
Daily Market Comments:     Crude stocks had a exceptionally large draw of -12.581 mill bbls vs. the average guess of 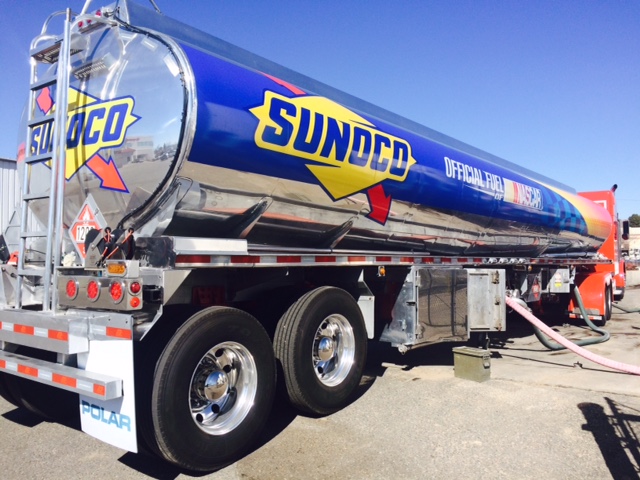 The DAYTONA Rising project, encompassing the Speedway's nearly one-mile long frontstretch, will be complete by January 2016. DAYTONA Rising will transform DIS into the world's first motorsports stadium with premium amenities and attractions.

"Sunoco is a long-time partner of ISC and we're excited to further develop our relationship," said ISC Chief Executive Officer Lesa France Kennedy. "A brand synonymous with motorsports for many years, Sunoco will continue to be a great asset across the ISC enterprise adding to the overall fan experience."

The multi-year agreement will provide Sunoco with naming rights for one of five fan injectors. The massive, new and redesigned entry statement includes over 20,000 square feet of Sunoco engagement and fan experiences that vertically span four concourse levels. Financial terms of the agreement were not disclosed.

"This represents the next chapter of our long-term partnership with ISC," said Sunoco Executive Vice President and Chief Marketing Officer Cynthia Archer. "ISC is taking the motorsports experience to new heights by creating a visually-compelling facility. Fans will be amazed when they see the new motorsports stadium and Sunoco's engaging injector experience for the first time in 2016."

Additionally, Sunoco will have branding rights for one of the fan "neighborhoods" located near its injector. A total of 11 football field-size neighborhoods will be located throughout the new frontstretch, each featuring custom bar, retail and dining areas, as well as dozens of video screens.

"We're thrilled to welcome Sunoco as a DAYTONA Rising Founding Partner," said Daytona International Speedway President Joie Chitwood III. "With a rich history and commitment to customers, Sunoco will enhance the race day experience for fans at the Speedway for years to come."

Through the partnership, Sunoco continues to build its heritage in motorsports. Sunoco has served as the Official Fuel of NASCAR® since 2004 and is the exclusive provider of Sunoco Green E15 racing fuel for NASCAR's three national series: The NASCAR Sprint Cup SeriesTM, NASCAR XFINITY SeriesTM, and NASCAR Camping World Truck SeriesTM.

The Company also owns and operates Motor Racing NetworkSM, the nation's largest independent sports radio network, and Americrown Service CorporationSM, a subsidiary that provides catering services, food and beverage concessions. In addition, the Company has a 50 percent interest in the Hollywood Casino at Kansas Speedway. For more information, visit the Company's website at www.InternationalSpeedwayCorporation.com.

Sunoco, Inc., wholly owned by Energy Transfer Partners, L.P. (NYSE: ETP), markets motor fuels through more than 4,800 Sunoco-branded locations in 26 states. Sunoco Inc. also has more than 650 APlus branded convenience stores which are company-operated or operated by third-party dealers. It is the world's largest manufacturer and marketer of racing gasoline and is the official fuel of NASCAR, IndyCar and NHRA. For more information on Sunoco Retail and to find a local Sunoco location, visit www.Sunoco.com.

DAYTONA Rising is a $400 million reimagining of an American icon - Daytona International Speedway. Five expanded and redesigned entrances, or "injectors," will lead fans to a series of escalators and elevators, transporting them to three different concourse levels. Each level features spacious social areas, or "neighborhoods," along the nearly mile-long frontstretch. At the conclusion of the redevelopment, Daytona International Speedway will have approximately 101,500 permanent, wider and more comfortable seats, twice as many restrooms and three times as many concession stands. In addition, the Speedway will feature over 60 luxury suites with trackside views and a completely revamped hospitality experience for corporate guests. DAYTONA Rising: Reimagining an American Icon, expected to create 6,300 jobs, $300 million in labor income and over $85 million in tax revenue, will be completed in time for the 2016 Rolex 24 At Daytona and DAYTONA 500.

Barton Malow is serving as the design-builder for the project. In addition to DAYTONA Rising, Barton Malow has renovated the University of Michigan "Big House" and the Rose Bowl.

ROSSETTI is the architect for DAYTONA Rising. ROSSETTI is an award-winning architectural design and planning firm with 46 years of expertise in sports and entertainment projects including the Green Bay Packers Titletown, renovations for the Seattle Seahawks at CenturyLink Field, a new headquarters for the LA Lakers, five MLS stadiums and the new retractable roof over the USTA's Arthur Ashe Stadium.

Race fans can follow the progress of the DAYTONA Rising project by visiting www.DAYTONARising.com and connecting with Daytona International Speedway on Twitter, Facebook, Pinterest and YouTube. Also, fans can see the construction project up close by taking one of the daily tours available at the Speedway on non-event days throughout the year. Visit www.daytonainternationalspeedway.com/tours or the Speedway Ticket and Tours Building for more information. For tickets and more information on Daytona International Speedway events, visit www.daytonainternationalspeedway.com or call 1-800-PITSHOP.

Daytona International Speedway is the home of "The Great American Race" - the DAYTONA 500. Though the season-opening NASCAR Sprint Cup event garners most of the attention - as well as the largest audience in motorsports - the approximately 500-acre motorsports complex boasts the most diverse schedule of racing on the globe, thus earning it the title of "World Center of Racing." In addition to eight major weekends of racing activity, rarely a week goes by that the Speedway grounds are not used for events that include civic and social gatherings, car shows, photo shoots, production vehicle testing and police motorcycle training.

Marcus Hook, Pa. (July 29, 2015) - Sunoco, the Official Fuel of the NHRA, has been the leader in the racing fuel category for decades, with a reputation built on quality, performance, and support to the racers. In their first year as the spec fuel of the NHRA pro classes, all of those elements have been demonstrated weekly as drivers and riders fueled by Sunoco have broken four national records and 59 individual track records across Top Fuel (TF), Funny Car (FC), Pro Stock (PS) and Pro Stock Motorcycle (PSM).

Just past the halfway point of the season, Larry Dixon (TF at 332.51mph), Courtney Force (FC at 325.06mph) and Hector Arana, Jr. (PSM at 199.88mph) all have set national speed records, while Jason Line (PS at 6.455 sec.) had the fastest elapsed time in the history of Pro Stock competition. At least one new track record has been recorded at every national event through Sonoma, a tribute to the consistency of performance that these competitors are finding with Sunoco Race Fuels.

Beyond the performance on the strip, Sunoco is also proud to say that at the halfway point of the Mello Yello Drag Racing Series season, based on Sunoco's competitive pricing, it is estimated that the pro teams have realized more than a quarter of a million dollars in savings on fuel compared to the previous season.

Sunoco Race Fuels are put to the test every time the top drag racers in the world hit the throttle. They trust Sunoco to help them set records and see the win light, and you can too.

Sunoco, Inc., wholly owned by Energy Transfer Partners, L.P. (NYSE: ETP), markets motor fuels through more than 4,800 Sunoco-branded locations in 26 states. Sunoco Inc. also has more than 650 APlus branded convenience stores which are company-operated or operated by third-party dealers. It is the world's largest manufacturer and marketer of racing gasoline and is the official fuel of the NHRA, INDYCAR and NASCAR.

To learn more about Sunoco Race Fuel and to locate where it can be purchased near you, visit www.sunocoracefuels.com.

For more information on Sunoco Retail and to find a local Sunoco location, visit www.Sunoco.com.